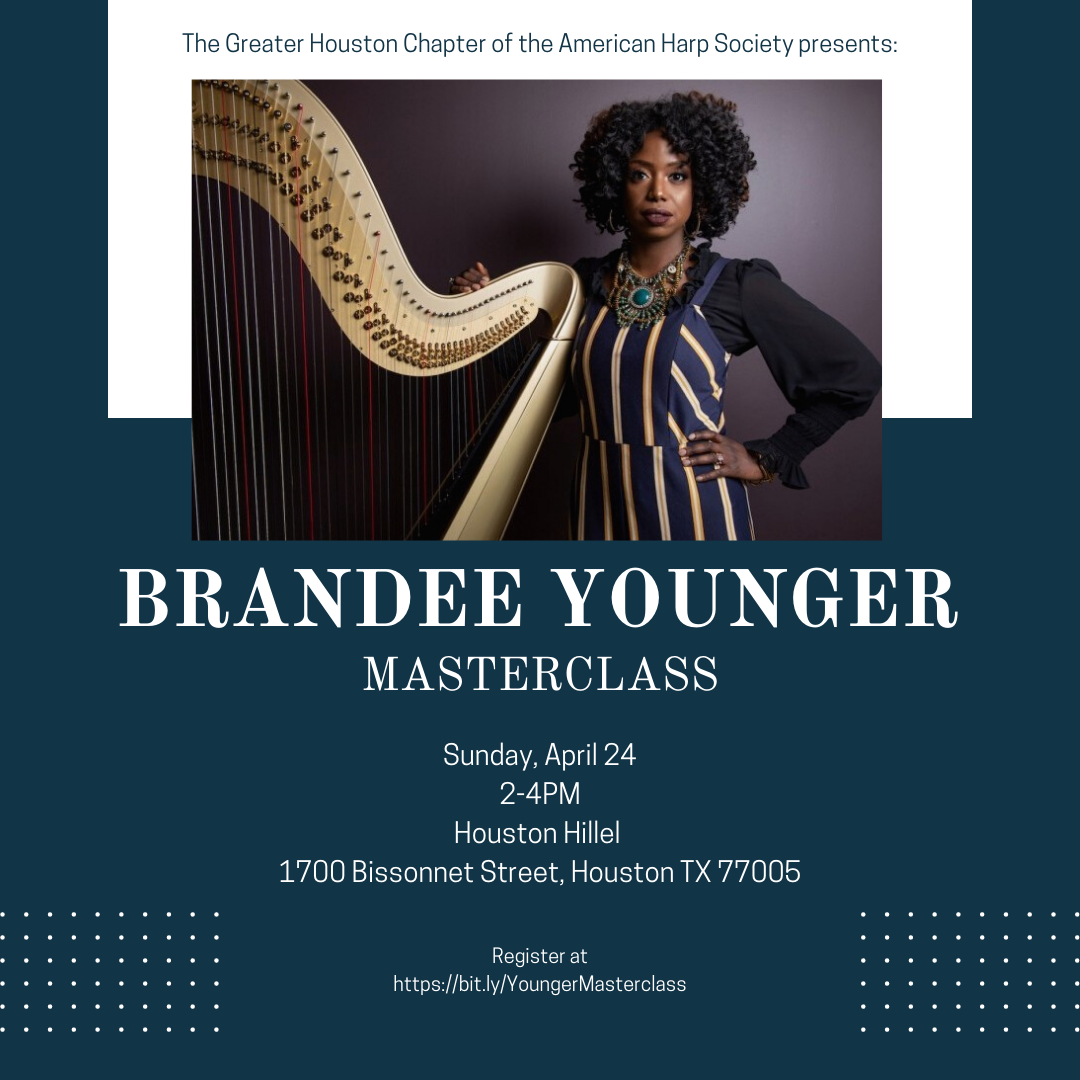 The Greater Houston Chapter of the AHS will be hosting Grammy-nominated harpist Brandee Younger in a masterclass on Sunday April 24 from 2-4pm. The masterclass will take place at Houston Hillel at 1700 Bissonnet Street Houston, TX 77005. Please use this form to register as a performer in the masterclass: https://forms.gle/Uk4DYeoqvvAKLZNt8
There are only 6 spots available! All performers must be members of the Houston Harp Chapter. If you are not already a member, you may join here: https://houstonharpists.com/join/

There is a $40 registration fee for performers and free to audit. The class is geared for more advanced harpists, but beginners and even adult students should be able to benefit. This fee may be paid following this link: https://houstonharpists.com/product/brandee-younger-masterclass-performer-fee/ or with a check upon arrival the day of the masterclass. A Lyon and Healy Style 85 semi-grand will be provided for all participants to use.

“No harpist thus far has been more capable of combining all of the modern harp traditions — from Salzedo, through Dorothy Ashby, through Alice Coltrane — with such strength, grace and commitment.” - The New York Times

A leading voice of the harp today, performer, composer, educator, and concert curator Brandee Younger defies genres and labels. She has performed and recorded with artists including Pharoah Sanders, Ravi Coltrane, Jack DeJohnette, Charlie Haden, Common, John Legend, The Roots, Stevie Wonder, and Lauryn Hill. In 2019, she released her fourth solo album, Soul Awakening, and her original composition “Hortense” was featured in the Netflix Concert-Documentary, Beyoncé: Homecoming. This same year, Ms. Younger was selected to perform her original music as a featured performer for Quincy Jones and Steve McQueen's’ “Soundtrack of America.” Ms. Younger’s ability to seamlessly inject the harp into arrangements and venues where it has historically been overlooked is a testament to her deep love for and exemplary command of the instrument.

She holds leadership positions through the Apollo (theater) Young Patrons Steering Committee and the American Harp Society, Inc. where she is Director at Large. As a concert curator, Ms. Younger organized “Divine Ella,” part of the Schomburg Center for Research in Black Culture’s annual Women’s Jazz Festival. She also served as curator of the 2016 Harp On Park concert series, “highlighting the diversity of the harp and the contemporary importance of an ancient instrument,” and most recently coordinated Her Song, featuring the works of women composers, both for Arts Brookfield.